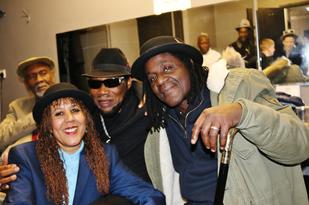 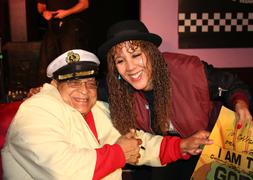 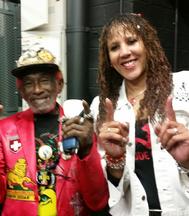 Sugary marries her teen pin-up Neville Staple (The Specials, Fun Boy Three, etc) on 4th January 2014, in Bryce Church, Sawmill, up in the mountains of Christiana, Manchester, Jamaica - Neville's birth place and where his parents lay to rest. 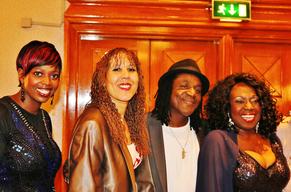 Backstage at Skamouth Festival with King of Ska, Derrick Morgan and Original Rudeboy Neville Staple (above) and Legend, Bunny Striker Lee (below).

​In 2015 Sugary performed 'Dirty Litle Liar' (The JK Skank) on the Jeremy Kyle Show set for ITV and started work on various music connections and collaborations with many legendary Jamaican artists, including her idols, the legendary Stranger Cole and Dandy Livingstone (recent Jamaica photos to the left), plus Lee Scratch Perry / Band (pictured right), as well as Jamaican Radio/TV Shows. ​​Her new track 'Way I Love You' is hot in Jamaica with Stone Love, Killamangaro and Irie FM taking it up. 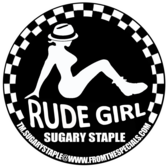 Sugary Staple (aka ‘Christine ‘Sugary Staple’) has been writing, producing, and performing in film, video and music since her teens and is also the wife and manager of the Original Rude boy, Neville Staple (From the Specials & Fun Boy 3). She is especially known for bringing energy, charisma, and fun to the stage during tours and shows and is currently celebrating her critically acclaimed new joint song productions (with Neville) and writing soundtracks for videos, as well as her artwork designs and graphics. Sugary was awarded an Historic Coventry UK City 2021 Accolade and Title of ‘Modern Day Lady Godiva’, in recognition of her activism, campaigning and charitable work raising thousands of pounds for vulnerable families in the UK, Caribbean and Africa, plus artwork auctions and support for Zoe's Place Baby Hospice, knife-crime, Homelessness and others.

Sugary, is usually found performing songs from her joint ska/punk/reggae albums, as a front women and along-side husband Neville Staple. However, she has spent recent months campaigning for the music and arts industries, severely affected by the Covid-19 Pandemic and providing personal dedication music shows, DJ sets and videos to isolated and hospital admitted fans. Sugary came from a difficult and harsh childhood and early adult life, but still managed to graduate in Business Management and Health and Safety, as well as pursue her creative dreams in theatre, film, literacy, and music. Neville Staple was her teen pin-up who she later married.

Sugary spearheaded the famous Skamouth Festivals with her colleague Tom, works with celebrated artists from the UK and across the World, plus with schools, colleges & charities. She is an official patron of the 2Tone Village in Coventry and Cefovid Uganda, as well as an Ambassador for Musicians Against Homelessness. Sugary recently wowed audiences with her stage presence and performances during huge headline sets at Rewind, Let's Rock, Boomtown and Rebellion Festivals and won a Frizzle TV Award in 2015 for her iconic looks of natural mixed dreadlocks, twists and curls. She also takes on regular roles for film and TV and her 2022 work includes producing brand-new music, appearing on TV series Shakespeare & Hathaway (BBC), Without Sin (ITV), Horrible Histories (CBBC), and writing, running events, touring globally, and continuing special music projects with the young people of Coventry, including student discussions, guidance and mentoring.

[Sugary] The Princess of Ska
Louder Than War Magazine

My talented friend has created ‘Original Rudegirl Sound’, a happy tune, just what we need

The hypnotic presence of Staple’s wife ‘Sugary’ Staple to his right, resplendent in ‘rude girl’ t-shirt and radiant energy, is another thrill to go with a never-ending stream of musical high points. She does an especially stellar job of re-creating the ghostly vocal refrain in the chorus to another Specials fan-fave, Ghost Town